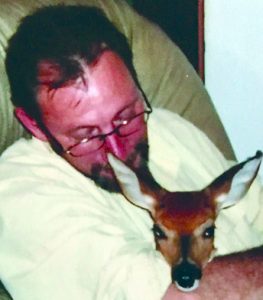 Michael Pazdera, 63, of Dunlap, Tennessee passed away unexpectedly. He was formerly a resident of Pine Bluff, Arkansas; Little Rock, Arkansas; and Seymour, Indiana.

He is survived by his son, Michael Pazdera Jr. and four siblings, Teresa, Mary, Tom, and William. He was also the favorite (don’t tell the other brothers) uncle to his many nieces and nephews.

He was preceded in death by the loves of his life, his mother and Debbie Harsh.

Mike has been an extremely hard worker from a very young age, starting out at Failla Janitorial Services, Illinois Tool Works, Omega Tube, and Seymour Tubing. Most recently, he was sent out to pasture a bit early after having a horse roll over on him and ruin his knee and hip.

When Mike was not working, you would find him gardening, sitting in the deer stand or on the water fishing. Mike started gardening at a young age. During the summer months in Arkansas, Mike and his family would show up early in the morning at Merlo’s Garden to pick their weekly vegetables. When Mike lost his dad at age six, his neighbor in Pine Bluff, Mr. Carter, shared his love for hunting with Mike and his brothers. When Mr. Carter was not out in the woods with the boys, Mike’s mom, Billie, took the boys to the Arkansas River for fishing.

Mike was the closest that any person ever will be to Dr. Doolittle. He had a magical way with animals. Over the course of his life, Mike raised deer, sugar gliders, dogs, cats, chickens, horses, squirrels, rabbits, pigeons, snakes, guinea pigs, hamsters, and turtles.

Mike had a heart the size of Wyoming and an intuitive mechanical ability. He once rebuilt a non-working bulldozer by himself and made a lake on his property in Indiana, all without having ever done either before.

He will be missed by all who ever knew him.

A celebration of his life will be held in Dunlap. We know that he is in heaven with his mother and father, likely having a beer and sharing a juicy story.

In lieu of flowers, Mike would want you to donate to your local animal shelter.