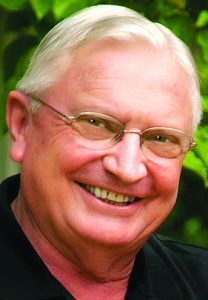 Jim was born on December 7, 1937 in Palmer, Tennessee to Alfred and Norma Stocker. He was the middle child of three boys and had a twin brother that died at birth. As a child, he worked on the family farm, referred to as the homeplace, atop the Cumberland Plateau. It was an idyllic 1,700-acre farm with rolling hills of green pastures, hardwood tree-covered mountains, a meandering creek, and mountain springs that must have been reminiscent of the Stockers’ Swiss origins. They grew most of what they needed for survival and sold any excess. They sold timber and raised chickens, hogs, and cattle; grew apples, potatoes, beans, greens, and many other vegetables. This was his Rocky Top.

He met his wife of 60 years, Betty Scott, while attending Sequatchie County High School in Dunlap, Tennessee. Their love was cemented on their senior trip when she came to his rescue after he got sick on an amusement ride, and the rest is history.

After completing high school in 1955, he became the first of his family to attend college. In 1959, he received a degree in Agricultural Business from the University of Tennessee (Knoxville). He helped fund his education through cattle sales, barbering, and being a pool shark.

In 1960, he began his career at Central Soya Company in Chattanooga, Tennessee and ultimately held positions in Orangeburg, South Carolina and Charlotte, North Carolina as credit manager. After 13 and a half years with the organization, Wendell Murphy recruited him to work for Murphy Farms. In a tenure lasting 28 years, he reached the highest levels of management in one of the most successful agribusiness firms in recent history. Serving as vice-president, executive vice-president and general manager, president, and vice-president of the board of directors, he helped the company expand to swine operations in eight states and engineer and manage the development of many cost-reducing technological production changes.

Over the years, he was a trusted advisor to many organizations. He was a member of the board of directors for Harrells Christian Academy for 25 years. He was active in the North Carolina Pork Producers organization and served on various committees, including the budget committee and as chairman of their political action committee. He served on the North Carolina pseudorabies task force from its inception until the disease was eradicated. He served as a member, appointed by the Governor, of the James Sprunt Community College Board of Trustees. He was elected to the board of directors of the National Pork Producers Council and served as chairman of the NPPC Swine Health Committee. He was involved in the development of the North Carolina State Animal Response Team. He served on the Ag Alumni Council at the University of Tennessee, later serving on the Ag Development Board, and eventually chairing the board for two years. He also served as President of the Duplin County Cattlemen’s Association and represented Duplin County as a director of the North Carolina Cattlemen’s Association. He received the North Carolina Pork Council’s Hall of Fame award in 2019, which is the highest honor bestowed by the organization, one reserved for outstanding lifetime achievement and contributions to the industry.

His primary hobbies were playing the guitar, golfing, and tending to his herd of some 300 black angus cattle, all of which he knew by number. Being a strong advocate of education, he created a trust after his cancer diagnosis for descendants of his mother and father that would pay for any level of higher education they wished to pursue. To date, this trust has helped put six family members through college. He also established the James E. Stocker Scholarship for Agricultural Economics at the University of Tennessee. He will be remembered as a man of good humor, intelligence, integrity, and epic snoring. He said often, “I tell everyone that there is plenty of time for sadness, and we need to live every day for doing better.”

Jim was preceded in death by his father Alfred, mother Norma, and brothers Don, Jarvis, and Russell.

A visitation was Sunday, January 5th at Community Funeral Home in Warsaw, North Carolina. A private funeral will be held. A celebration of life event will be held at the River Landing Clubhouse on Sunday, January 26th at 3 p.m. with a reception to follow.