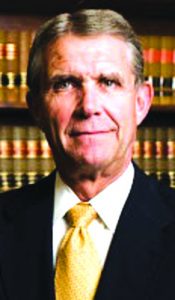 Greer was born on September 9, 1948. He was the son of Lota Applewhite Greer and the late Judge Arthur Thomas Greer, Jr. Greer was married to the love of his life, Susan Burns Greer, for 50 years.

After graduating from Sequatchie County High School, where he excelled both academically and on the football field, Greer attended Tennessee Technological University (TTU) on an athletic scholarship, graduating in 1970. Years later, all four of Greer’s children attended and graduated from TTU. He and Susan endowed a scholarship for first generation college students.

After college, Greer attended the University of Tennessee law school, where he again excelled and was a member of Law Review, graduating in 1973. He returned to Dunlap in the fall of 1973 and began practicing law.  Throughout his 46-year career as a lawyer, he handled all types of cases, but his true passion was in the courtroom, where he skillfully tried well over 100 jury trials. His talent in the courtroom was rivaled only by the hard work and preparation he put into each case. He made an impact on thousands of clients and their families. Greer was blessed to work with his daughter, Elizabeth Greer Adams, for 16 years and with his father, Judge Thomas Greer, after he retired from the bench. Greer was a longtime member of the Tennessee Trial Lawyers Association (TTLA) and served as president of the organization from 2006-07. His son, Thomas Greer, served as TTLA president ten years later, the only father and son to serve as president in the organization’s 50 plus year history. His leadership and work in the legislature, where he fought tirelessly for the victims of personal injury, wrongful death and workplace injuries, affected Tennesseans across the state.

Greer was also a member of the prestigious, invitation-only, American College of Trial Lawyers and the American Board of Trial Advocates, the two most preeminent, exclusive organizations in the country for trial lawyers. He was a member of First Baptist Church in Dunlap, where he attended, even as a child, and later taught Sunday school for over 20 years. He also served on the Sequatchie County School Board for many years.

Greer lived a fortunate life and leaves behind countless happy memories for family and friends.  Although his interests and hobbies varied throughout his life, his two constant passions were his family and the law. When he was not practicing law, he spent time with his family and friends. Greer coached little league, attended dance recitals, moved kids into college dorms, apartments, and first homes, and took countless family vacations with Susan, their four children and grandchildren. Of all his amazing accomplishments, he was the proudest of his children. He and Susan had a marriage filled with love, respect, and adventure.

Greer was preceded in death by his father, Thomas A. Greer, Jr.

Juliet, and Penelope Greer, and Seth, Benjamin, and Nicholas Domizioli. Greer is also survived by his brothers, Dr. Patrick (Becky) Greer and Dr. Michael (Vallerie) Greer; and close cousin, Jimmy (Debbie) Thompson. He will be missed by loving nieces, nephews, cousins, and friends.

Serving as pallbearers were his Greer family nephews and his sons-in-law.

Memorial contributions can be made to the Sequatchie County Library Foundation, 227 Cherry Street, Dunlap, TN 37327 or the charity of your choice.