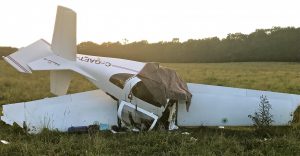 The pilot of a Stoddard-Hamilton Glasair II FT aircraft that crashed Wednesday on Cagle Mountain is in surgery at Erlanger Medical Center in Chattanooga, Sequatchie County Sheriff Coy Swanger reported. The Sheriff was informed of the pilot’s status by a relative. Sheriff Swanger said the pilot, from Canada, left Gainesville, Georgia, refilled in Cleveland, and was en route to Wisconsin. A complete mechanical failure of the aircraft was reported and the pilot sent out a distress signal, Sheriff Swanger stated. Following the  3:45 p.m. crash, the wreckage was spotted by a Tennessee Highway Patrol helicopter pilot. Sheriff Swanger said the crash victim managed to crawl from the wreckage and was in good spirits, considering his situation. He received treatment at the scene from Puckett EMS before being transported by Life Force helicopter to Chattanooga. The victim’s name has not been released as of yet, pending complete notification of relatives. For more, see the July 25 issue of The Dunlap Tribune. Photo courtesy of Sequatchie County Sheriff’s Department.