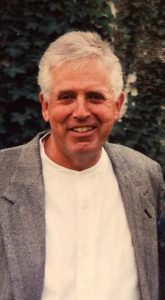 After a lengthy battle with Alzheimer’s, Edward Gould “Poppy” passed away December 12, 2017 at his home in Dunlap, Tennessee.

He graduated from McCallie School and went on to receive a B.S. degree in Wildlife Management from the University of Arizona. He served in the Army as a game biologist. Then, he and his family live in Mobile, Alabama, where he was employed by Eli Lilly Pharmaceutical Company for 29 years. After retirement, he moved to his family farm on Cagle Mountain. He brought joy to all those around him whether he was telling a story of days gone by, writing a poem to perfectly depict a person’s personality, reciting a myriad of facts from history, or pointing out the name of each of the trees around him in the woods where he loved to hike. Poppy never met a stranger and made everyone he met feel special. He loved the Lord deeply and he and his wife were members of Abba’s House in Hixson, Tennessee.

Poppy is survived by his caring and loving wife of 59 years, Mary Ann; two daughters, Kimberly (Skip) Peters and Holly (David) Denmark; a sister, Elizabeth Hearne (Michael) Claffey; and a brother, Dr. Lance (Lenja) Gould. Poppy was the beloved grandfather to his five grandchildren, Taylor and Dylan Peters and Madeleine, Emma and Will Denmark.

Special thanks to Michael Craft, his CNA, for the loving, tender care he provided for 22 months.

He donated his body to the medical school at the University of Tennessee. No service will be held but we would love for you to join us at the drop-in visitation in memory and celebration of the life of Ed Gould. It will be held Saturday, January 27 from 4:00 to 8:00 p.m. EST at Red Bank Chapel (The Meeting House) on 3912 Dayton Blvd, Chattanooga, TN 37415. Parking is limited, so please park in the large lot on the back side of the building above the road.

We are so privileged to have known and been loved by Poppy, and his legacy lives on in all of our hearts.