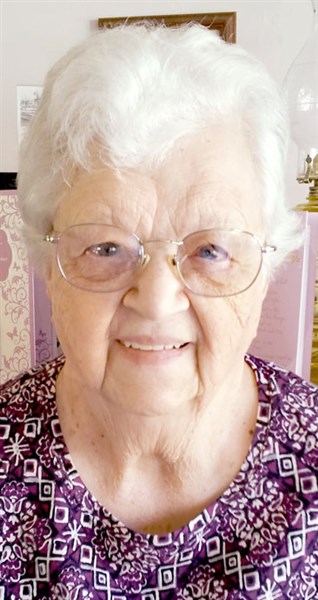 Marie Hickey Davis was an Appalachian mountain girl born in a doctor’s home in Chattanooga to Charles Ralph and Mary Loucinda (Whitlow) Hickey on Wednesday, July 21, 1920 and passed Tuesday, June 30, 2015.

She grew up on family acreage in a log house on Fredonia Mountain, just outside Dunlap. She graduated from Sequatchie County High School in 1938.

Marie was encouraged by her mother to write a letter to a young soldier serving with the 104th Timberwolves infantry in Europe during WWII, William (Bill) Mitchell Davis. Several letters were exchanged and they were married on May 18, 1948 in Rossville, Georgia. They lived in Seminole, Oklahoma while Bill received his electricians certification before moving to Copan, Oklahoma to work for National Zinc Company in Bartlesville. They settled into their home on Oak Street in Dewey in July, 1955, where the family has lived ever since. Bill preceded her in death on July 3, 1981.

Marie’s greatest passion was her family. She enjoyed the chase of tracking down family history and became a worldwide reference for those searching family names (Hickey-Whitlow-Standifer-Seals-Sturman-Johnson-Davis-Hatfield-Lowe-Kittrell-Maupin).

She loved the color of flowers, the music of birds and the bounty of gardens. She was one of God’s most faithful who passed onto her family her high morals and ethics. She thanked Jesus every night and asked God for help every single day.  He granted her a long life of strength, unconditional love and compassion. She loved talking daily with her family on the phone and reading the current news in her hometown newspaper, The Dunlap Tribune.

She created a lasting legacy and family heirlooms with her crochet and in the 61 quilts that she handmade over the years, leaving just one unfinished. The highlight of her life last year was winning first place in the hand-pieced category of the Oklahoma Cooperative Extension Service’s 100 Year Quilt Block Challenge. She became a Facebook star, garnering votes across America and Europe winning second place in the Online Viewer’s Choice category. Her boys remember her cooking and Christmas candies, as sweet as their memories of Marie as a loving mother who gladly sacrificed for their success in life. She will be greatly missed, but thought of often and dearly. Time is the only thing that will stand between us until we meet again.

She is preceded in death by her husband; parents; one daughter, Sandra Carpenter Brown, sister, Ivory McAbee; and one grandson, Brian Dewey Davis.

In lieu of flowers, memorials can be made to the Washington County Nutrition Project, 300 E. Angus, Dewey, OK 74029.

Funeral services were held Monday, July 6 at the funeral home chapel. Burial was in Dewey Cemetery.

Services were under the direction of Carter Davis and the Davis Family Funeral Home. Online condolences and remembrances may be shared with Marie’s family at davisfamilyfuneralhome.com.